Hopi Efforts to Protect Water on the Sacred Mountain 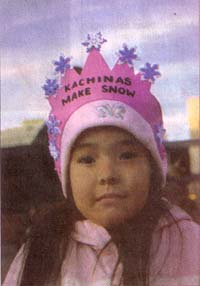 Hopi, Navajo, and other Indian tribes and environmental groups challenged the U.S. Forest Service 2005 decision to allow artificial snowmaking on the San Francisco Peaks which is a threat to water.

San Francisco Peaks–highest mountain in Arizona and a sacred place for Indian tribes in the region.

The San Francisco Peaks, almost 13,000 feet tall, are the holy mountains where the Hopi Kachina spirits dwell. It is a site of sacred pilgrimage for several tribes, source of plant materials for ceremonials, source of the waters for the desert lands below.

“The San Francisco Peaks have been held sacred, since time immemorial, by the Navajo, Hopi, Zuni, Tewa, Haulapai, Havasupai, Yavapai-Apache, Yavapai-Prescott, Tonto Apache, White Mountain Apache, San Carlos Apache, San Juan Southern Pauite, Fort Mcdowell Mohave Apache, and Acoma.
All tribes traditionally hold that if this Sacred Mountain is disturbed by any means, their ways of life are violated.
The Hopi and Navajo Tribes have historically objected to any development that has had the potential for disturbing this sacred mountain.” (source: Save the Peaks website)

in 2006, the U.S. District Court ruled against lawsuit on behalf of Indian tribes and environmental groups to stop artificial snowmaking.

A federal appeals panel blocked a ski resort’s plan to make artificial snow by spraying treated wastewater on mountains that Indian tribes consider sacred. In a unanimous ruling, a three-judge panel of the United States Court of Appeals for the Ninth Circuit, in San Francisco, overturned a lower court ruling from January 2006 that would have let the resort, the Arizona Snowbowl, to proceed with the snowmaking and other upgrades on the San Francisco Peaks near Flagstaff. Thirteen tribes, along with the Sierra Club and other environmentalists, had appealed the decision. They said using wastewater, no matter how clean, would offend deities and spiritually contaminate herbs and other plants used for medicine and religious ceremonies.

“In a victory expected to reverberate across Indian County, The Hopi and five other tribes have won their lawsuit to stop snowmaking using reclaimed wastewater on the San Francisco Peaks.

On March 12, 2007, the U.S. Court of Appeals for the 9th Circuit found in favor of Arizona tribes who maintain that using reclaimed wastewater to make snow at the ski resort violates their rights under the Religious Freedom and Restoration Act.  The decision sets a precedent for the interpretation of RFRA in regard to Native American religious rights.

None of the Forest Service’s arguments — multiple use interests, or economic interests of the City of Flagstaff or the resort owners — justify placing such a substantial burden on the tribal members’ exercise of religion, according to the appeals court.  “We hold that the Forest Service’s approval of the Snowbowl’s use of recycled sewage effluent to make artificial now on the San Franciso Peaks violates RFRA.” wrote the court.

The judges explained that the religious burdens placed on the tribes by the proposed snowmaking “fall roughly into two categories: (1) the inability to perform a particular religious ceremony, because the ceremony requires collecting natural resources from the Peaks that would be too contaminated — physically, spiritually, or both — for sacramental use; and (2) the inability to maintain daily and annual religious practices comprising an entire way of life, because the practices require belief in the mountain’s purity or a spiritual connection to the mountain that would be undermined by the contamination.”

“I am really thankful and deeply appreciate the 9th Circuit Court’s decision,” said Bucky Preston, one of the Hopi plaintiffs.  Some of the judges in the courts must have a good heart and looked deeply into themselves to realize that the Peaks are so sacred to us and they understood our beliefs.”

Above portion of this article was first published March, 2007

2008
I am sad to report that a subsequent appeal by the US Forest Service led to overturn of the above decision.
2009
Environmental groups, the Hopi Tribe along with other Arizona tribes appealed to the U.S. Supreme Court, but were not granted a review.
2010
Another lawsuit filed by Saves the Peaks Coalition and 9 other plaintiffs challenging the Forest Service decision to approve artificial snow making was decided in favor of the Forest Service.
2011
Emergency injunction against construction fails and owners of Arizona Snowbowl began construction of an 14.8 mile wastewater pipeline and started clear-cutting over 40 acres of alpine forest on the San Francisco Peaks.

June 16, 2011: Six people chain themselves to Snowbowl’s construction equipment and locked themselves in pipeline trench to stop the desecration.
From June 2011 to September 2011 a total of 28 arrests were made during efforts to halt the eco-cide and desecration of the Holy Mountain.
Encampments during this time were also been established to protect the Holy Mountain.

Below are some of the images of protests in Flagstaff and the at the Snowbowl:

Protests of artificial snowmaking decision by the U.S. Forest Service at the Snowbowl